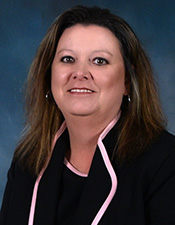 Dr. Janet Wansick
President of Eastern Oklahoma State College
After Dr. Wansick began her career as a mathematics teacher at McAlester Public Schools from 1992-2002, she moved into higher education. She served as a professor of mathematics at Northern Oklahoma College and East Central University. She joined Eastern as the dean of the McAlester Campus in 2011.

During her tenure as the top academic administrator at both Eastern and Connors, Dr. Wansick has supervised a variety of departments and served as the chair of each institution’s Higher Learning Commission Accreditation Committee. She has also served as chair of the Oklahoma State Regents for Higher Education (OSRHE) Council of Instruction, OSRHE Two-Year Council of Instruction, and OSRHE Economic Development Council.

She was appointed as President by the Eastern Board of Regents on June 15, 2020.
REGISTER HERE

Site powered by MemberLeap, a product of Vieth Consulting